The answer to the question can you boil water in a crockpot is – Yes. You can certainly boil water in a crockpot, but it’ll take like 2-2.5 hours to bring it to a boil on a high setting. It depends on the model of your crockpot plus the amount of water you used. The sad fact is, in a slow cooker your water will boil until at a simmering point, not more than that. It won’t have a full rolling boil.

Do you want to know more details about this experiment? Then let’s not waste more time and get into the segments!

Can You Boil Water In A Crockpot on Different Settings?

Yes you can boil water in a crockpot on both high and low settings. The crock pot is synonymous with the slow cooker. For both two options, this process is similar.

Water boils at a constant temperature of 212°F(100°C). At this point, water transforms from liquid to vapor. Whether it’s simmer boiling or rolling boiling, in both cases this temperature is a must. The intensity of temperature creates the differences between gentle and rolling boil. A rolling boil is intense and it needs much more temperature than gentle boiling.

However, most of the models of crockpots have Low & High cooking temperatures for cooking. Some models come with a keep-warm setting. The heat produced in a crockpot is like this-

Therefore, in both settings, we can see that the crockpot can reach the boiling water temperature. But the only trouble is, it takes time like 2-3 hours depending on the model of your crockpot and the quantity of water.

How Does a Crock Pot Boil Water? 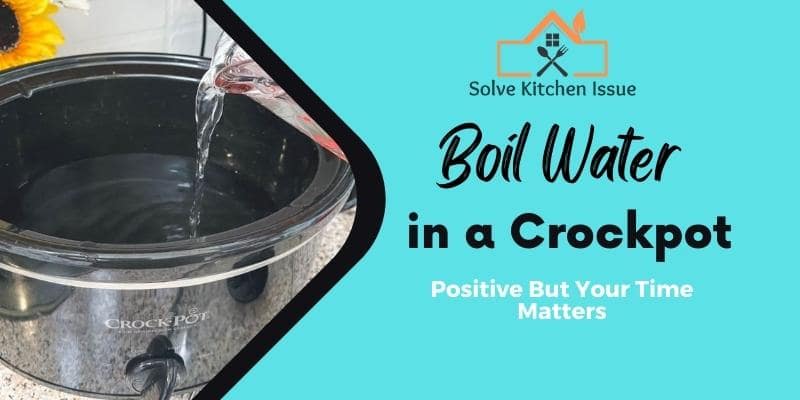 A crockpot is a slow cooker that cooks any food slowly for a long period. It takes time to preserve the food nutrients with the food moist and tenderly well-cooked. In a crockpot, slow heat is used to slow-cook food and it doesn’t let any water escape from the cooker pot.

Unlike other cooking utensils or silverware, in a crockpot or slow cooker, the vapor of water can’t escape from the cooker. Rather, the steam condenses on the interior lid of your cooker.

That’s why the temperature inside the crockpot doesn’t increase over 212°F until the heat changes the water into steam. Then, it can easily escape the closed lid.

You probably have noticed that after you open the closed lid of your crockpot, small droplets of water drip back into your food. That’s what happens and the reason it takes such a long time to boil water in a crockpot. Whether it’s a low or high setting, it’ll take enough time to reach beyond 212°F and then boil.

Read also: Can You Cook Chitterlings in a Crock Pot?

How Long Does a Crockpot Take Time to Boil Water?

On average a crockpot takes 2-3 hours to boil water. In low settings, it may take 7-8 hours to boil water and in high settings, it may take 2-3 hours. However, it’s needed to mention that you have to wait for this much longer to reach the crockpot at this temperature. When the crock pot reaches this temperature, it’ll take a much longer time to boil the water.

Also, in the crockpot, you can bring only a simmer to a gentle boil, not a rolling boil. Generally, on any other utensils, boiling water takes an average of 10-20 minutes on the stovetop or oven. This 10-20 minutes is equal to the 2-3 hours of a crockpot. Hence, when you can boil water on a stovetop within 10-15 minutes, it’ll take almost 90-120 minutes in a crockpot.

Slow cookers or crockpots aren’t designed to attain their’ temperature fastly in a couple of minutes. That’s why it takes time. So, if you have enough time and patience to boil water for 4-5 hours, then you can go for it.

How Do You Boil Water In A Crockpot?

In this segment, we’ll be discussing the way of boiling water in a crockpot. But about the time, you can minimize the time if you put the inner pot on a stove and boil it in that way. But can you put a crockpot on a stove?  Yes, you can put your inner pot of crockpot or slow cooker on a stovetop or in the oven. That way, it’ll be faster.

However, if you have only the option of a crockpot, then you’ll have to give the proper time to boil water. After pouring the water into the crockpot, set the temperature setting at HIGH, and then let the cooker take its’ sweet time to boil water at the simmering point. The more water, the longer time is needed. However, 2 hours is the minimum time.

A notable mention is, you shouldn’t try anything to fasten the heating process, it may hamper the crockpot. Remember that the crock pot is made for slow cooking by restraining the steam or vapor. A high setting may hasten the process, but not too much.

Can a crock pot boil over water?

Yes, when your water is simmering, it can overflow from your crockpot. It only happens when you overfill your pot. That’s why it’s recommended to fill only 2/3 of the inner pot and leave the rest of the 1/3 part empty. That’s how it’ll leave a safer side.

How many amps does a crockpot use?

How long does it take a crockpot to heat up?

It takes almost 2-3 hours to heat a crockpot or slow cooker. In a low setting, it may take 6-8 hours and in a high setting, it can take 3-4 hours. If you want to heat your food fast, then better use other utensils, not a crockpot. Plus, don’t leave the crockpot running while leaving your house.

How long does it take water to boil on high heat?

To boil water in the highest heat, can take 2-3 hours. In low temperatures, it can take almost 6-8 hours. You can only gently boil in a crockpot, not a rolling boil.

Besides: Check out one of the best Crockpot Beef Stew Recipe!

Crockpots don’t have the mechanism to change temperature faster, so it takes time to boil or heat anything. Rather, you can use the inner pot of the crock pot on a stovetop to boil water.

Hey, This is Helen Knight! Welcome to Solve Kitchen Issue! I'm passionate about cooking and making simple, delicious recipes that you can always feel confident feeding to friends and family. My goals for you are to have fun in the kitchen, learn new things, and create beautiful dishes. I have a lot of experience using kitchen appliances, so making great food is my passion and my favorite thing to share with others. I look forward to cooking with you!